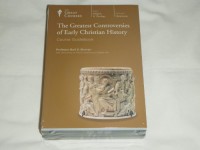 Ehrman is a prolific author and lecturer as well as one of my favorites. I've read four of his books and listened to at least four of his lecture series, but some of them were prior to my Goodreads.com days so there may be more. These lectures cover many of subjects covered in previous lectures, so I was doubtful he would be able to say anything I hadn't heard before. Well, I still learned plenty, and his lectures are always interesting.

The following is a list of the lecture titles of this collection of lectures, and since they are all in the form of questions I'll give my short answers based on my impressions from listening to these lectures. Don't consider my answers as spoilers. Trust me, you need to listen to the lectures to truly understand how the answers were reached. Ehrman doesn't give clear yes and no answers like I do below since historians can never be absolutely sure about what actually happened.

5. Did Jesus Expect to See the World’s End? -- He expected God's Kingdom on this earth.

6. How Close Were Jesus and Mary Magdalene? -- No more close than others.

8. What Secrets Did Judas Betray? -- That Jesus said he was king of the jews.

10. Was Pontius Pilate a Secret Christian? -- No

11. Was Jesus Raised from the Dead? -- No. Description given of how Christians probably came to think so.

12. Did the Jews Expect a Suffering Messiah? -- No

13. Is Paul the Real Founder of Christianity? -- Cofounder is more descriptive

17. Who Were the Original Christians? -- They were more widely varied in their beliefs than Christians today.

20. Was Christianity an Illegal Religion? -- No. There was some sporadic and localized persecution.

21. Is the Old Testament a Christian Book? -- Yes, and for reasons that modern believers wouldn't think of.

22. Did Early Christians Accept the Trinity? -- Not at first, but it became necessary to differentiate orthodox group from Arians.

23. Do We Have the Original New Testament? -- Not exactly

24. Who Chose the Books of the New Testament? -- It was by consensus.

I doubt that the issues of whether Jesus was married or questions about his relationship with Mary Magdalene were significant issues in the early church despite the title of these lectures. Those seem to be the type of questions that began to be talked about since The Da Vinci Code and Jesus Christ Superstar.

Apparently there are many people who think that Jesus was made the son of God at the Council of Nicea of A.D.325 because Ehrman is emphatic that this was not the case. Both sides already agreed on that. The main issue discussed at the Council of Nicea was whether the characteristics of God the Father and Jesus were similar (homoiousios) or the same (homoousios). That one iota made all the difference.

It is scary to consider some of the books that almost got included in the canon of the New Testament. One of the worst is the Epistle of Barnabas which is even more anti Semitic than the canonical New Testament.

Ehrman says it makes no sense for Judas to have been paid 30 pieces of silver to betray the location of Jesus at night as described in the Gospels. Instead, Ehrman suggests that Judas was paid for his testimony that Jesus had said privately among the disciples that he was to be the King of the Jews and the disciples would rule over the twelve tribes of Israel. All through the Gospel of Mark Jesus responds to people who say he's the son of God that they should tell no one. In other words, he did not publically make that claim. Thus in order to get that private testimony the Jewish authorities needed to bribe Judas. This would also help explain why the Romans put the sign on the cross that read "King of the Jews." The Romans weren't concerned about Jewish religious controversies, but when there was a hint of political insurrection they acted quickly and without mercy.