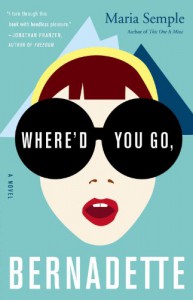 This was a thoroughly enjoyable comedy/satire/mystery depiction of life inside a mixed up family of the nouveau techno riche. The father works for Microsoft, and the mother is a past recipient of a Macarthur Genius Grant.

The lesson here is that lack of communication can lead to lots of trouble which in the context of this book is funny. But if it happened in real life it would be considered a sad tragedy. The satire is spread generously with smart people behaving stupidly, private schools with problems, religious types not living up to their ideal, modern psychiatry making a fool of itself, self-help counseling groups being weird, and use of a virtual assistant to an absurd degree.

Even Seattle takes a hit:

"What other city has given birth to the jumbo jet, the Internet superstore, the personal computer, and cellular phone, online travel, grunge music, the big-box store, good coffee?" (p.146)

The story is told mostly in e-epistolary format (emails or blog postings) with some explanatory comments by the fourteen year old narrator who we learn by the end of the book is compiling this material into a book. The documents reveal the story leading up to and the subsequent mystery of the disappearance of the narrator’s mother. There is an ending, but I can't reveal whether it's happy or sad without being a spoiler.

I think the book could be considered as young adult literature, but some may question several adult themes as not appropriate for young readers. I can't argue specifics without being a spoiler, but I would argue that there are some good lessons in this story for young readers.

The movie rights to this book were sold about a year ago. I'm not sure how soon the movie will appear, but it has the potential to be a good movie.
novel
Tweet