Paris 1919: Six Months That Changed the World by Margaret MacMillan 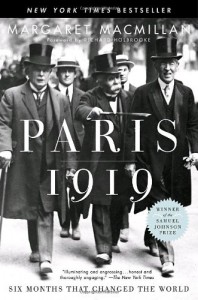 According to Wikipedia.org, this book argues that the conditions imposed on Germany in the Treaty of Versailles did not lead to the rise of Adolf Hitler. I read the book back in 2003 so my memory of its contents is a bit hazy, but I don’t remember that point being made by the book. What I do remember is that the breakup of the Austro-Hungarian and Ottoman empires caused numerous cases of minority enclaves being surrounded by hostile neighbors. The resulting ethnic cleansing through migration (and otherwise) continued to the end of the twentieth century (e.g. breakup of Yugoslavia).

Wikipedia.org also says that David Lloyd George is the author’s great grandfather. I wonder if that influenced the judgment of the author.

I was reminded of this book by the following short review that was on yesterday’s PageADay Book Lover’s Calendar. (Note that the 1st sentence below contradicts Wikipedia's comment regarding the rise of Hitler.)

A dramatic account of the World War I peace accord that planted the seeds for World War II. Woodrow Wilson emerges as a fascinating, broken figure, and the greedy, shortsighted angling of certain key negotiators will keep you turning the pages. Even readers who think they know the story will find Margaret MacMillan’s clear-eyed narrative both enlightening and hair-raising.
PARIS 1919: SIX MONTHS THAT CHANGED THE WORLD , by Margaret MacMillan (2001; Random House, 2003)