The Memory Palace: A Memoir by Mira Bartok 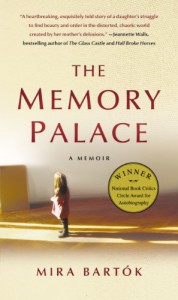 This is a memoir of life with a schizophrenic mother. This is not a situation one would wish for, and I as a reader was sufficiently uncomfortable with the story during the early pages that I considered bailing out and not finishing it. But when I pondered the decision it occurred to me that if I read the book perhaps I could learn a bit about schizophrenia, and maybe I would develop an appreciation for the trials endured by family members and loved ones when schizophrenia occurs.

This is also a memoir about the author striving to reclaim lost memories after traumatic brain injury in a car accident (which followed a previous concussion caused by slipping on a sidewalk). Her struggle for memories was tinged with pain since they included a troubled childhood with an ill mother and dysfunctional extended family.

After escaping their home environment via college scholarships the author and her sister found it necessary to change their names and move to addresses unknown in order to avoid their mother's demented harassment. This drastic step which led to seventeen years of separation was made necessary when they were unable to have their mother legally institutionalized.

The style of writing reveals a mind of an artist which at times enters into contemplative circles of thought. The book’s title and structure are built around a metaphor based on the story of the sixth-century B.C. Greek poet Simonides, who was attending a party at a palace and stepped outside just before the building collapsed. He was able to identify the mangled bodies recovered from the ruins based upon his memory of where the guests had been standing.

The author in writing this book is thus rebuilding an imaginary palace in which she can place her memoires for safe keeping. It’s a beautiful metaphor for describing the author’s struggle to reconstruct a life on the rubble of a catastrophically ruined family and her striving against the cognitive limitations caused by her brain injury.

The seventeen year separation comes to an end when the author and her sister learn that their mother is terminally ill. They are present when she dies and thus are able to have a bit of closure to their estrangement.

In the end the author asks the question that some readers are probably wondering, did she shirk her duty as a daughter by leaving her mother? Is it a daughter’s responsibility to forsake her own career to be her mother’s caretaker? The whole situation was made difficult by the fact that the legal system found that their mother was not sufficiently impaired to be involuntarily committed to a mental hospital.

The book is filled with quotations written by their mother in her journal during the years of homelessness and separation from her daughters. The writing in the journals could be judged as curiously creative if a reader didn’t know about the schizophrenia. The book ends with the question of whether their mother would have been happier being institutionalized.

It’s a complicated question. Their mother had sufficient grasp on reality to miraculously survive her homelessness into her 80s, but yet she was obviously incapable of properly taking care of herself. How would her journals have read if she had been institutionalized? Would she have had a journal? Or would she have been so drugged as to not feel the need to journal?